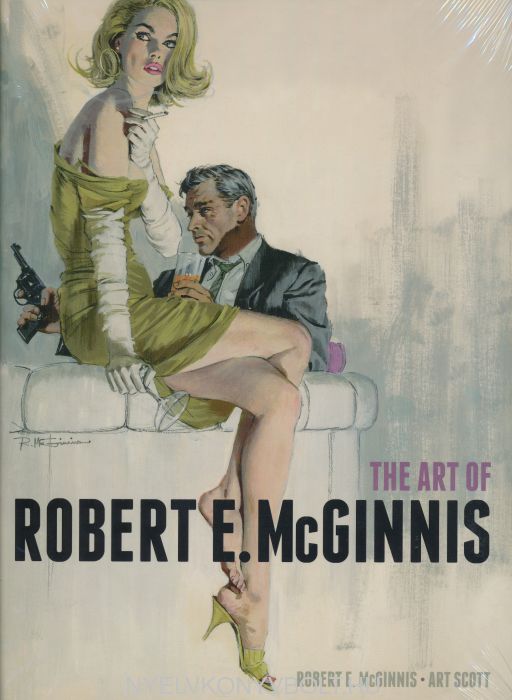 Tweet
Robert E. McGinnis began his career in 1947 as a cartoonist, and produced his first cover illustrations for 1956 issues of the magazines True Detective and Master Detective. Then in 1958, he painted his first paperback book cover.

The emergence of the “McGinnis Woman”—long-legged, intelligent, alluring, and enigmatic—established him as the go-to artist for detective novels. His work appeared on Mike Shayne titles and the Perry Mason series, and he produced 100 paintings for the Carter Brown adventures. Yet McGinnis became famous for his work in other genres as well: espionage, romance, historicals, gothics, and Westerns.

McGinnis’s first major magazine assignments were for The Saturday Evening Post, and his work has graced the pages of Cosmopolitan, National Geographic, Good Housekeeping, Guideposts, and others. McGinnis women frequently cropped up in the men’s magazines of the ’60s and ’70s.

His first movie poster was for Breakfast at Tiffany’s, with an iconic renderingof Audrey Hepburn. Almost instantly, his poster artwork could be seen everywhere in theaters, on billboards, in newspapers and even on soundtrack albums. His work for Hollywood became a who’s-who, with posters for James Bond, The Odd Couple, Woody Allen.

Pen & Ink: Tattoos and the Stories Behind...

The Parliament in Budapest

The Opera House (English and Hungarian)

The Hungarian Parliament - A Walk Through...

The Painted Lady - The art of tattooing the...

In the Company of Stone